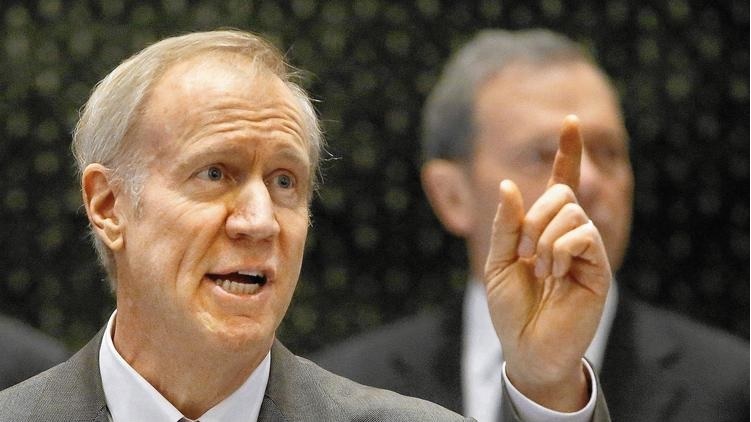 Illinois Gov. Bruce Rauner delivers his State of the Budget address to a joint session of the General Assembly in the House chambers Feb. 18 in Springfield Ill.

Rauner called for deep spending cuts to Medicaid, pensions and other programs to fix the state’s budget mess without raising taxes. (Seth Perlman, AP)                  By Daniel I. Dorfman   Pioneer Press

Lake Forest, Lake Bluff prepare as Rauner advocates a 50% cut to local sales tax revenue.
It’s been about two weeks since Governor Bruce Rauner called for a drastic cut in the amount of income tax revenue municipalities receive from the state. While the negotiating process is just beginning, Rauner’s proposal has Lake Forest and Lake Bluff officials wary and somewhat nervous.

In his first budget address Feb. 18, Rauner advocated cutting by 50 percent the amount of sales tax revenue the state sends to local communities, as one way to deal with the state’s major financial issues. Not surprisingly, communities throughout the state are not happy with the prospect.

Lake Forest City Manager Bob Kiely said that if Rauner’s proposal were enacted, it would leave a $960,000 hole in an approximate $84.5 million budget.  “It would be a combination of looking to raise revenue be it sales or property tax or start cutting,” Kiely said. “One million dollars represents 10 -12 employees.” Kiely added that since 2008, Lake Forest has eliminated 12 percent of the city’s employees, so another 12 employees would be another five percent cut.

Reducing the amount of money the local communities receive from the state has been floated in the past, specifically in 2010 by then-Governor Pat Quinn. His proposal was not enacted following a temporary increase in the income tax, which expired last year.

Though the cuts didn’t go through, communities have already been looking to raise revenue elsewhere. Lake Forest did so last year with an $8 per household monthly sanitation fee that is scheduled to bring $600,000.

Still, Kiely is frustrated with the state of affairs. When the state income tax was created in 1969, the idea was for the state to collect the revenue and then distribute it to municipalities so communities would not have to collect their own income tax, he said.

“It’s unfortunate because the state looks at this as their money and it is not because of the earlier commitments when the original income tax was in place,” Kiely said. “Unfortunately they collect the money and they can pass legislation that manipulates the allocation of the funds to local governments.”

Kiely said Rauner and the legislature need to look inward in addressing the financial woes that beset Illinois.

“I believe the state is in a dire financial condition but they have to accept the fact that it is of their own doing,” he said. “They need to engage all parties in the ultimate resolution in how best to get out of this predicament. We fully anticipate that is going to happen as they work toward the course of a resolution of the state budget situation.”

In Lake Bluff, Village Administrator Drew Irvin said a 50 percent cut would mean a roughly $282,000 hit on a $13 million budget.

“For the village of Lake Bluff, it would be a change in our aggressive capital improvements program,” Irvin said. “We have been working hard in investing in capital versus operations. This year we are spending $200,000 more than we have historically on resurfacing projects. That would have to be examined in the future and obviously we would have to dial that back.”

While Rauner, a Winnetka Republican, has made his initial foray in the budget process, there is still a long way to go before any formal changes are settled with the Democratic dominated legislature.  Former State Sen. Susan Garrett, who represented Lake Forest in the state capital for 14 years, said Rauner has a tough road to navigate over these next few months.

“The governor needs to reach out and convince the legislatures and municipal leaders that this significant loss of revenue wouldn’t be detrimental to local communities,” she said. “That will be a challenge.” Garrett, who has seen more than one budget battle, said she expects some give and take will be forthcoming, but local communities may have to take a hit of some sort not too far down the road.

“All of these cuts are painful, but at the end of the day, everyone has to give something,” Garrett noted. “We all know there are going to be reductions in funding, but it may not be as extreme as the way the governor is portraying it now.”

Daniel I. Dorfman is a freelance reporter for Pioneer Press.